The Colonnade of the Vorontsov Palace, part of the UNESCO World Heritage Site.

“Take him instead to Odessa, a nice city, a wonderful place to raise a family.” Everything Is Illuminated (novel & movie)

In its almost 220 years of history, Odessa has been through dramatic changes in citizenship and population, bloody revolutions, German Nazi and Romanian siege & occupation, heroic underground guerilla war, and even a cholera outbreak. What allowed it to survive all of this, emerging with flying colors, is its relentless optimism, its undying sense of humor and artistry that permeate every pore of the city’s existence.

Odessans are lovers and traders, not fighters. Over 70 different nationalities reside in this major city-port. From the very childhood, they learn to co-exist peacefully and respect each other. This is a very colorful place and exceptional environment to enjoy life. This is where I was lucky enough to grow up. This is the city I love. END_OF_DOCUMENT_TOKEN_TO_BE_REPLACED

I received a Sunshine Blogger Award from author and inspiring blogger, Holly Michael. Thank you, thank you, Holly! It is a great honor and privilege!

Here is the link to Holly’s blog, Writing Straight: http://writingstraight.com/2012/08/13/award-time-yay/ Check it out, it’s awesome!

To accept this award, I am required to answer a series of questions and then pass the Sunshine Blogger Award to other deserving bloggers, link my nominees to this post and comment on their blog letting them know of their nomination. Below are my answers and the blogs I have nominated.

1. What is your favorite Christmas movie?

Christmas in Connecticut. It’s fun and funny, has enough intrigue and romance, plus a rare innocence impossible to duplicate today.

2. What is your favorite flower?

Lotus. Check out my recent post: The Divine Lotus

3. What is your favorite non-alcoholic beverage? Green Tea: Jasmine Pearl or Dragon Pearl (Chinese), as well as Sencha (Japanese). I like making tea in one of my traditional yixing teapots, which I collect, and drink it out of a delicate china cup, enjoying the aroma and taste. It’s a very meditative experience. Yum!

4. What is your passion? Imagining cool stories and making them come alive on paper or screen. I like to teach, inspire and open people’s eyes to the obvious and not so obvious through my writing.

5. What is your favorite time of year? Spring, because that’s when nature awakens to new life and because it’s my birthday time. And Fall, because of the beautiful colors and festive harvest.

6. What is your favorite time of day? Night time, when everything out there, in the big world, quiets down and I can sit down at my computer to think and write.

7. What is your favorite physical activity? Walking and hiking. They say, it’s a quintessential writer’s activity as creative juices flow best while walking. 😉

8. What is your favorite vacation? I’ve been to many countries and loved them all. I really miss Russia. I went back to Russia last year to reconnect and do research for my book, Gold Train, Accidental Spy Russia Adventure set in Moscow and St. Petersburg. 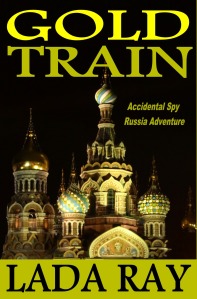 One of the golden-domed Kremlin cathedrals, Moscow, Russia (this is real gold, by the way).

I am planning trips to Odessa, on the Black Sea, and to Lake Baikal, Siberia, both to re-visit and do research for my upcoming books.

A beach in Odessa where I grew up. Odessa is a beautiful resort on the Black Sea. Along with several other exotic Black Sea locales, it will be the backdrop of one of the future Accidental Spy Adventures.

The famous Potemkin Steps in Odessa, connecting the historic center above with the seaport. The Potemkin Steps ensemble considered one-of-a-kind architectural phenomenon, was the site of the 1925 silent film, Battleship Potemkin (Russian: Броненосец «Потёмкин», Bronenosets Potyomkin), which has been called one of the most influential movies of all time, and was named “the greatest film of all time” in 1958.

The famous grand stares inside Odessa Opera, considered by some architecturally the best Opera House in the world, along with Milan’s La Scala. And in case you were wondering, yes, it is real gold! The Odessa Opera, Potemkin Steps, the unique seaport, along with the entire stately center of Odessa together are a UNESCO World Heritage site.

The oldest (25 mln years old), largest and deepest lake in the world, Baikal contains over 20% of the planet’s fresh water reserves, and according to locals, possesses mysterious healing powers. It will be featured in my upcoming YA fantasy/thriller, The Earth Shifter.

These are the bloggers I feel deserve the Sunshine Award because of their positive, inspiring and/or creative blogs.

3. Francis http://niltsi.com/ Francis writes beautiful poetry and does wonderful photography. His dog, Pumpkin, is a cutie!

4. Maddy Walsh at 1 Earth Now Blog http://1earthnow.wordpress.com/ For selflessly and generously seeking out & reblogging today’s best and most inspired bloggers!

6. The Blazing Trail http://theblazingtrail.wordpress.com/ For courageous and inspiring posts!

Update: I have just added 3 more well-deserving blogs to my list of award recipients.

10. Gertie http://fabricatedfables.wordpress.com/ Gertie is only 12, but she writes with maturity some adults could envy. Her stories are imaginative and evolved and I think she has great future as a writer! I especially liked her fantasy short story, Why Should I Save the Universe? http://fabricatedfables.wordpress.com/2012/07/22/stuff/ Keep writing, Gertie!

Congratulations to all winners!