“You must write for yourself, above all. That is your only hope of creating something beautiful.” ~ Gustave Flaubert

When several years back I first wrote the fantastic legend of the Bear Drum, it was meant as a short story depicting the young shaman Tengis’ adventure in the Siberian Taiga, near the shore of the Sacred Lake Baikal. It was a story I put on paper for myself because it just popped into my mind and because I thought it was, well…beautiful. Little did I know that this short story would eventually become the foundation for the epic novel, entitled The Earth Shifter.

Tengis’s favorite drum was large, round like the sun, nearly flat and made of deerskin. The drum was in very good shape, but it must have been very old because the deerskin was yellowing. On the inside of the drum was an incredibly realistic painting of a huge Siberian bear standing completely erect on his hind legs. The bear emanated power and, if you could believe it, spiritual wisdom, all the while managing to resemble the tiny and slightly bowlegged Tengis.

Usually, Siberian shamans had their power animals depicted on the inner surface of a drum. This technique, unlike painting your power animal on a drum’s outer surface, as was common with Native American shamans, ensured that the power animal protected and empowered its user from the inside. As an added bonus, it also protected the painting from fading due to frequent pounding on the drum.

Faithful to the ages-old shamanic tradition, Tengis never took money for his healings. He didn’t need much, but the many grateful people he’d helped throughout his life always worried that the great shaman didn’t have enough. As a result, even during the worst of times he had everything he needed, and then some. An interesting side effect was that Tengis owned a collection of over one hundred drums, hanging on walls, sitting on shelves and stored in closets. Most of his drums were given to him throughout the many years of his shamanic practice.

The Big Bear Drum—his favorite—was made for him a long time ago by a celebrated local artisan. Distinguished by its amazing healing voice and unique, reverberating tone, the drum was later painted personally by Denis Velekh, a renowned artist from St. Petersburg, after Tengis healed his dying ten-year-old daughter.

Tengis loved to talk to his drums, especially this one.

“A drum represents the wisdom of the Mother Earth,” he often remarked. “Strike it, and you’ll hear her heartbeat. The drum will tell you many stories of what was and what’s to come—you just need to listen.” 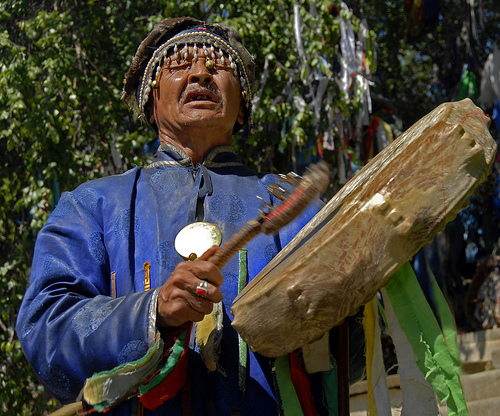 Sasha always wondered how a Siberian bear came to be Tengis’s favorite power animal. And that evening, when the cozy fire crackled merrily in the hearth and Tengis lovingly stroked his old drum, she finally heard the story.

A long time ago, when Tengis was very young and his father was still alive, he was called to heal a reindeer herder’s wife, who was gravely ill. The herder lived on a remote farm, far into the taiga. The healing was successful, but the woman was weak. Tengis told the man to stay by her side through the night and to keep brewing the special Siberian ginseng and herb tea that he’d prescribed. Meanwhile, Tengis started getting ready for the return trip. It was a bit late in the day and the herder tried to convince him to stay overnight.

The majestic realm of Lake Baikal and Siberian Taiga

“The snow’s too deep and the days are too short. Wait until tomorrow morning and I’d be privileged to take you home personally!” pleaded the herder.

No matter how sunny any given Siberian winter may have been, the locals would never stay overnight in the frozen taiga, where the temperature could easily drop to minus fifty degrees after sunset. Besides, while Siberian bears usually hibernated this time of year, hungry wolf packs relentlessly scouted the forest for any food they could find. And that was the kind of encounter you definitely wanted to avoid.

But Tengis, with the carelessness of youth, disregarded the herder’s pleas. He was eager to get home. His father promised him an advanced shamanic training early the next day, and Tengis wasn’t about to miss this opportunity.

At first, it was going well as he briskly walked across the forest, but the night was creeping up on him too fast, with enormous trees obscuring what little light of the day was left. Sure enough, heavy snow started falling, hiding his path, and with a sinking feeling, halfway home, Tengis realized that there was no way he could reach his destination before nightfall.

He stopped by a clearing to catch his breath. As he surveyed the area, he noticed a tall mound of earth just ahead. The space under the mound seemed protected from the snow and wind, and it looked like a good place to sit down and consider the next step. But the closer he got to the mound, the deeper the snow became, and just before reaching it, he sank in right up to his waist. As he frantically tried to free himself from the huge snow pile, his heart skipped a beat.

In the distance, where the white snow of the clearing met the darkness of the trees, he saw a pair of gleaming yellow eyes, and another, and another. He counted no less than twelve pairs of eyes. Exhausted from the protracted winter, hungry and determined to have a long-awaited feast, rejoicing that a foolish human had wandered into their domain, the wolf pack was closing in.

Tengis could sense their excitement and their impatience. He didn’t blame them, knowing that their survival instinct took over. Tengis took a deep breath and assessed his options. As a shaman and a healer, he didn’t carry a gun. His only weapon was a travel knife, very handy for cutting branches, but hardly sufficient against a hungry wolf pack. He knew that empty-handed, freezing, and up to his waist in snow, he wasn’t in the best position to survive.

He decided that his best bet was to lean against the tall mound of earth, therefore protecting his back, and somehow try and shield his front from the upcoming attack. Tengis took off his rucksack and threw it as far as he could into the snow. His favorite drum was inside and he wanted to save it from the wolves. The drum inside the rucksack made a low reverberating sound as it touched the ground.

For a brief moment in time, Tengis felt that the whole world had become still. He threw one last glance around the snowy clearing, took a deep breath, and said a prayer,  “Please help me, Mother Earth… please protect me, Father Heaven… I still have so much to do here on Earth, so many people to help, so many wrongs to right! It is not my time to go! Please help me…”

His mind registered the wolves charging at him as if in slow motion as he tightly covered his head with his arms. His sturdy deerskin coat withstood the first attack.

He could hear the confused growling of the wolves next to him. They were regrouping. Then they charged again and sank their sharp teeth into the helpless man in the snow.

The deerskin coat started giving way and the sound of it being ripped by the sharp fangs filled Tengis’s ears. The wolves’ growls grew impatient as they ripped his coat, determined to penetrate this unusually resistant outer layer. And then, he heard himself scream as a wolf’s teeth sank into his flesh.

But at that particular moment, another, much louder roar was added to the chorus, the roar of an angered bear. Tengis cautiously peeked with one eye. A huge bear, rugged and lean from hibernation, drew up to his full height and charged at the wolves from under the earth mound behind. The bear advanced, taking wide swipes at the squirming wolves. He was angry, and he was beside himself that his winter hibernation had been so rudely interrupted. Startled wolves flew in all directions, yelping in pain, leaving crimson blood trails, then scrambling back to their feet and sprinting toward the cover of the trees. Within minutes, all the wolves, except one, disappeared back into the taiga. The remaining wolf stayed motionless in the snow, a big black ink stain on the pristine page.

Tengis knew that he was next, and covered his head, wondering how much longer his damaged deerskin shield could withstand the attack. Slowly and grouchily, the bear approached Tengis and started sniffing him. Then, he poked him with his nose, as if urging him to start moving toward the cave.

Carefully—incredulously—Tengis raised his head, and their eyes met. In that surreal moment of suspended disbelief, a complete and total understanding passed between the man and the beast. The bear resumed his nudging and Tengis understood: he was invited to come in and warm up.

He found his bag at a distance and threw the last glance at the field of recent battle, taking in the disturbed white sheet of the snow and a single black stain of a wolf on it. He took a deep breath of crisp night air and entered the musky realm of the bear cave.

Inside, he sat down, opened his rucksack and got out the provisions the herder had packed for him for the road—bread, salted fish, smoked meat, and a can of honey. He laid all that down on a piece of cloth and made an inviting gesture to his gracious host. The bear sat down on the other side of the cloth and helped himself to the spread. Tengis smiled at him and could have sworn that the bear smiled back.

The dinner was soon over and the bear was ready to resume his sleep. He lay down on a bed of straw in the depth of his cave and stared at Tengis, as if inviting his guest to make himself comfortable next to him. Tengis hesitated, but the chill of the night was now seeping through his torn coat.

He lay down next to the bear and pressed his shivering body against the animal’s thick fur. The pervasive musky smell made his head spin, a distraction only for a moment. Soon Tengis was asleep, cuddled against the enormous body of his furry savior, secure, warm and peaceful, and completely unaware that the temperature outside dropped that night to record levels even by Siberian standards, and that the desperately hungry wolf pack dared to come back to quietly finish off the carcass of the fallen wolf left earlier on the snow.

Tengis awoke with the sun’s first rays, inhaling the fresh morning air with a smile on his face. He said thank you to the Mother Earth and Father Heaven, prayed for the safety and good fortune of the sleeping bear, and surveyed the landscape, mildly surprised that the dead wolf’s body had gone.

He was home well before lunch, exhausted, cold, but light and inspired. The bear and the drum of the night had been with him ever since.

THE EARTH SHIFTER, and my other books, are on huge pre-holiday sale at Amazon, Smashwords & BN on December 9-16, 2013! Click for details

Or visit BOOKS BY LADA RAY for a glimpse of all books at a glance!

19 thoughts on “Writing Bliss, Siberian Shaman and Legend of the Bear Drum”