Sochi Olympics venues. Black Sea in the foreground and magnificent Caucasus Mountains in the background. (Click on image to see more detail)

In February 2014, Sochi, the unique Russian resort on the Black Sea will be hosting Winter Olympics. What makes it unique? While the climate on the Black Sea coast of Sochi is sub-tropical, with palm trees and warm sea even in the winter, the nearby Caucasus Mountains have snow caps even in the summer. It is here, in the Caucasus Mountains, at Krasnaya Polyana (meaning, Red Meadow or Beautiful Meadow), that the Winter Olympics 2014 will take place.

In Sochi, for the first time in history, The Winter Olympics will be held in a sub-tropical climate! 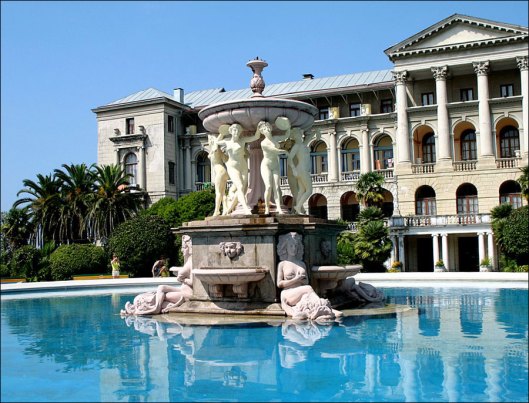 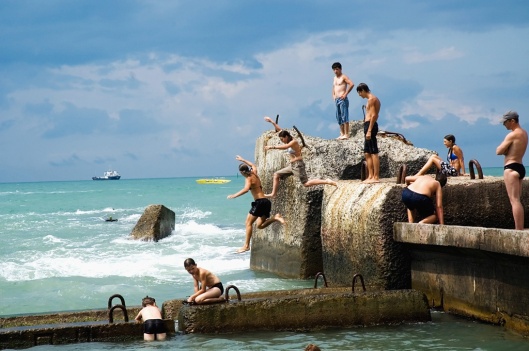 The Olympic torch ceremony for the Sochi Olympics is just as unique and record-setting as the host city itself. The Sochi torch relay has started in Olympia, Greece and will continue through the entire Russia, whose territory stretches through 9 time zones. It will visit Russia’s 83 regions and almost 3000 cities and villages. The Olympic torch will pass through many beautiful and unique nature spots, including the Earth’s largest body of potable water, Lake Baikal in Siberia, featured prominently in my metaphysical fantasy thriller THE EARTH SHIFTER. In addition to trains, planes and boats, the torch will be traveling through Siberian wilderness in a reindeer sleigh and in hot air balloons! 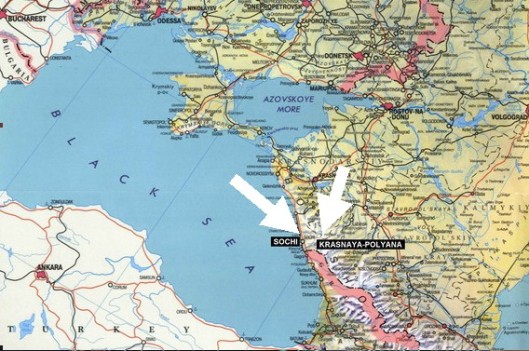 Sochi and Krasnaya Polyana on the map. Notice Odessa on the other side of the Black Sea and Crimean Peninsula in the middle.

From there, for the first time in the history of mankind, the Olympic torch will leave the confines of our planet to fly to Outer Space via a Soyuz rocket. The Sochi Olympic flame will be a welcome guest at the ISS, where it will take a historical Space Walk with Russian cosmonauts.

Another record: Sochi to host the greenest Olympics ever

It will take 123 days, 65,000 kilometers and 14,000 torch bearers to cover the entire Sochi torch relay. This is by far the longest and most spectacular journey the Olympic torch has aver made, which has never been attempted before. The idea is to showcase Russia’s history, nature and many achievements in science, art and economy; to celebrate its vibrant, diverse and forward-looking culture. According to organizers, throughout this journey, every Russian citizen will be close enough to the Olympic torch to enjoy it live.

During this breathtaking torch relay, many interesting videos are planned. I’ll be posting some of them on my blog as they become available. Till then, enjoy first reports and vids about the Sochi Olympics Torch Relay, courtesy #RussiaToday!

Also check out the related post on Futurist Trendcast blog:

Read my analysis of the history of the Russian oligarchs and their present day evolution. What secret agreement was reached between Putin and the oligarchs behind the closed doors? What does the future hold?

The attached video is about Russian oligarchs’ investments in Sochi, including new sports complex, ski launch, Olympic village, hotels, new airport, marina, resorts and many other things. The cost of the entire Sochi Olympic project is so far 4 times over budget and is the record-setting $50bln compared to planned $12bln. The question the interviewer asks is whether investors will ever see their money back? It is a very interesting discussion – must watch!

Also, this vid is well worth watching for the beautiful views of Sochi. A lot has changed since I was there last. Can’t recognize the place!

Ah, and here’s is a nice surprise contributed by Darlene Foster @ Darlene Foster’s Blog, a children’s author from Vancouver, British Columbia, CA and a friend of #LadaRayBlog.

Darlene’s photo taken at the Sochi Olympics pavilion at the 2010 Vancouver Winter Games. The view looks like real, even got me fooled for a sec. 😉

Check out my posts about Odessa, another beautiful Black Sea city where I grew up:

Odessa, the Pearl of the Black Sea