This is part 2 of my Odessa, The Pearl of the Black Sea mini-series. Read post 1 here!

Odessa Bay, including port and the iconic Odessa Lighthouse – one of its symbols.

Odessa Seaport. Seeing Off a Ship – Monument to all who are at sea and to those who are waiting ashore. The Odessa Lighthouse can be seen in the background.

The population of Odessa is just over a million, however its cultural impact and its presence are on par with larger capitals of the world. At the same time, it preserves the rare charm and coziness of a much smaller place. Odessa is a self-styled “state within a state” which always fancied itself as a porto franco, while being fatefully stuck in someone else’s backyard. But it’s one of those places that is destined to always bounce back from any adversity or disappointment. It’ll always find its balance because of its built-in DNA of fun, love, art, success and humor! And THAT no one can take away.

In this city, art has always been very important. Cobblestoned Pushkin Street with Odessa Philharmonics on the left.

Famous Russian writer/poet Alexander Pushkin was exiled to Odessa from the Russian capital of St Petersburg in the first part of the 19th century. Located on Pushkin Street, the beautiful building above was his residence while in Odessa. It is presently the Pushkin Museum. 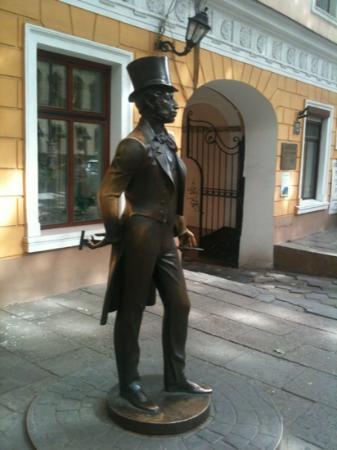 Alexander Pushkin statue next to the Pushkin Museum

In general, Odessa boasts a pretty monumental list of famous scientists, engineers, writers, singers and athletes who were born, grew up, or lived at one point on another on these hospitable shores.

Included are: Sergei Korolev – the father of practical space exploration, who has sent the first Sputnik and the first man, Yury Gagarin, into Space (he went to school in Odessa); microbiologist Ilya Mechnikov (Odessa University is named after him); Vladimir Filatov, ophthalmologist, founder of the famed Filatov Eye Institute. 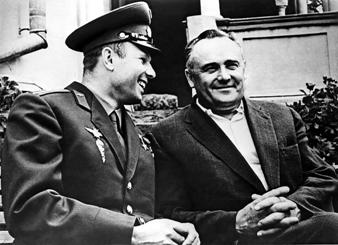 The family of the famous French singer Joe Dassin emigrated to Paris from Odessa. Unique singer Vitas, referred to as “a voice from an angel,” and “diamond of Russia,” who enjoys a god-like status in Asia due to his one-of-a-kind high pitch voice, was born and grew up in Odessa.

My favorite contemporary singer and songwirter Vitas. His voice is absolutely unique and impossible to replicate, his songs are amazing and otherwordly. 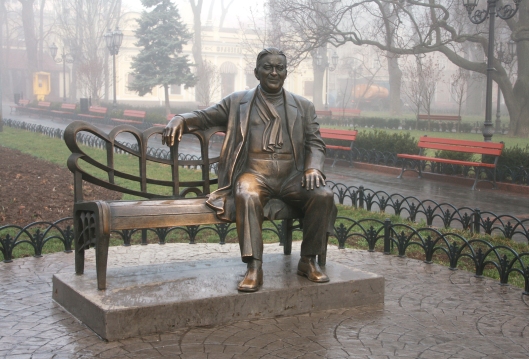 Even though Odessa is a southern city, its figure skating school was famous for producing such Olympic/world figure skating greats as Oksana Baiul, Victor Petrenko, and their equally famous coach Galina Zmievskaya.

Odessa Movie Studio, named after Alexandr Dovzhenko. I grew up next door. The movie studio was the sponsor of my high-school, located across the street.

I’ve just barely scratched the surface. There are many, many other famous scientists, writers, dancers, skaters, gymnasts, etc.

Odessans live all over the world, but they never forget where they’ve come from.

The Chairman of the club is famous Russian comedian, Mikhail Zhvanetsky (on drawing above).

The slogan of the club is “Odessans of all countries, unite!”

A tribute to the famed Odessa beaches: 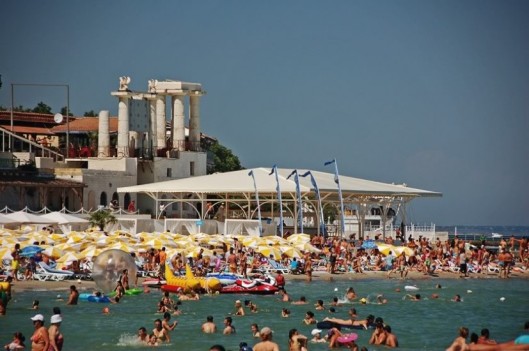 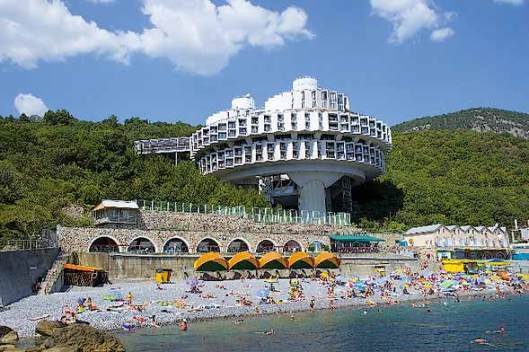 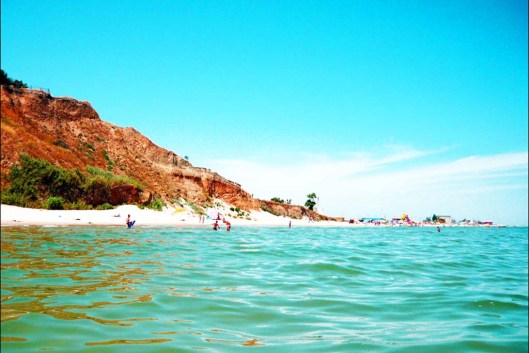 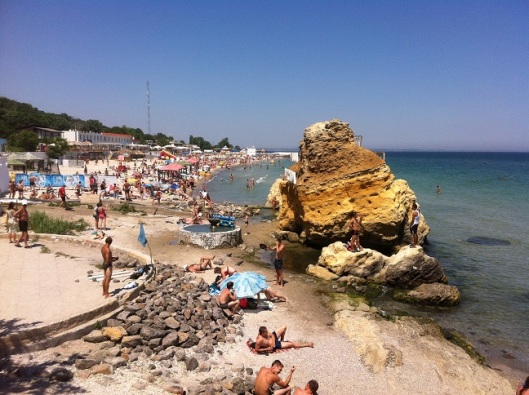 More fun in the sun

A tribute to the nostalgic Odessa tram:

This is the red tram I grew up with

The oversized bottle above reads “Champagne French Boulevard.” I grew up on French Boulevard (Frantsuzky Bulvar), called during soviet times Proletarian Boulevard (Proletarsky Bulvar). Its historic name was restored in the 1990s. This is a beautiful tree-lined and cobblestoned street lined with beaches, resorts, restaurants, Odessa Movie Studio and Musical Comedy Theatre. The only manufacturing facility in the area is fittingly, a wine & champagne factory. 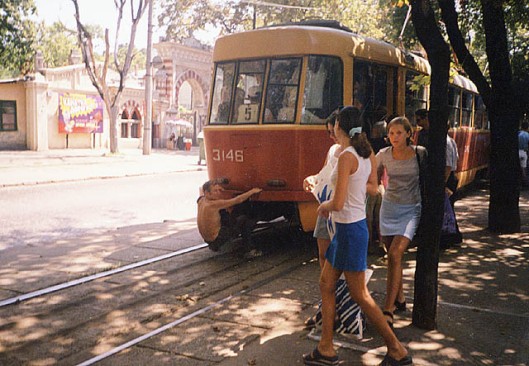 My pet tram, the famous Tram #5 running the span of the French Boulevard along all the beaches and resorts. The entrance to the Otrada Beach can be seen right behind it. Notice the man hanging from the tram? If you can believe it, this kind of dare is a “national Odessa sport,” but don’t try it at home. 😉

Local charm: An old Odessa courtyard with a kitty (“Odessky dvorik,” as it is known).

Only in Odessa. A strange apartment building called “a wall house.” How do people manage to live there? In reality, this is an optical illusion: the building is triangular in shape, which cannot be seen at this angle. 😉 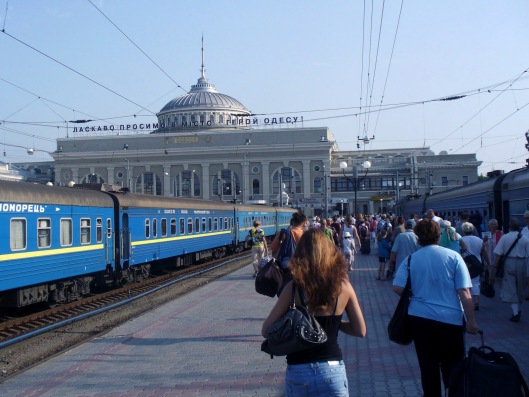 The landmark Odessa Train Station. My parents worked for Southern Railways and a big part of my childhood evolved around the station. How I adored to travel by train! I took every opportunity I had to hop on a train and go exploring.

This is one of my favorite childhood memories. While the Ottoman Khadzhibei fortress was destroyed during the Russian takeover, several fortresses in the surrounding area are still intact. How I loved visiting the Akkerman Fortress, located in the quiet town of Belgorod-Dnestrovsky, Odessa Oblast. 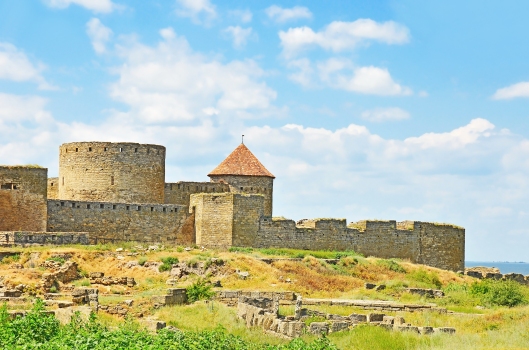 Akkerman fortress in Belgorod-Dnestrovsky, near Odessa 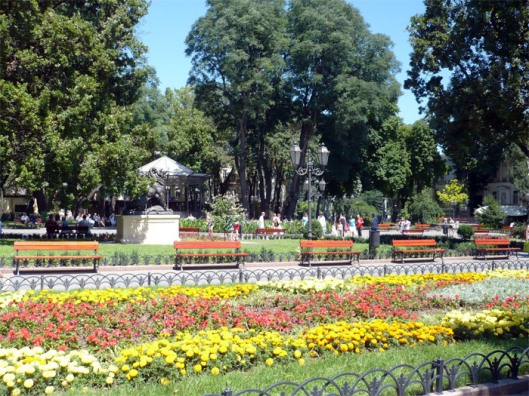 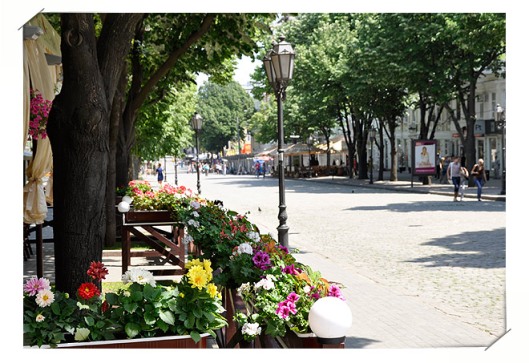 A Ukrainian Cossack in historical costume on Primorsky Boulevard

And this is Odessa’s new tradition, The Bride Parade

So many great memories! Here, I just barely scratched the surface as it would take a million posts to describe the charm, the uniqueness, the beauty and the intangible, impossible to replicate, feel that Odessa exudes. When I think about Odessa, the air around me brightens up and I am transported to the world in which I can hear the familiar ringing of Odessa’s trams and where the sound of waves echoed by calls of seagulls is pure poetry in motion. I can smell the blooming acacia and lilac mixed with warm sun and Odessa’s famous gentle sea breeze. And this precious moment lasts… until I have to get back to reality.

Read Part 1: Odessa, The Pearl of the Black Sea