From mystical Scotland, I’m enchanted to welcome metaphysical fantasy author, Rory Mackay, and his debut novel, ELADRIA! Rory is a member of our YA Revolution and spiritual blogger – both huge pluses in my book. 😉 Congratulations on your new book, Rory! The cover looks great and the story sounds very intriguing! 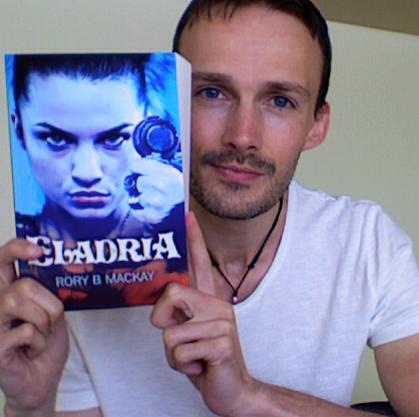 The fate of an entire world is changed forever when Tahnadra’s royal moon is attacked and overthrown by religious terrorists. Only narrowly escaping with her life, teenage Princess Eladria flees to the planet, now a fugitive on her own world. Lost in a hostile and unfamiliar land ravaged by generations of war, Eladria finds herself embroiled in a sinister experiment that threatens to destroy her world and countless others. As the barriers between dimensions rapidly collapse, Eladria learns that she alone can save her world. But her path is filled with obstacles and before long everything is called into question, including the very nature of reality itself.

Eladria is a compelling, character-driven fantasy with elements of science-fiction, philosophy and metaphysics. With its relatable characters and universal themes of life, love and redemption, it’s a book that can be read on multiple levels: as a straight-up fantasy thriller or an engaging reflection on the nature of life, personal identity, society, religion and coming to terms with loss and dealing with our demons.

There was no easy way to tell someone their entire world was about to be destroyed. Maybe that was why the old woman dispensed the prophecy in such a bizarrely offhand manner. Two short sentences. Two short sentences that would forever change the young princess’s life.

“On the Fifth Day of Rusaak, darkness will fall. Your entire world will be lost.”

The moment Eladria heard those words, her mind and senses froze and she stared at the woman in a blank stupor. She was certain the entire marketplace had simultaneously ground to a halt, for all went quiet. Of course, it was more likely that in her sudden state of shock, her mind had simply tuned out all background noise. A sudden tightness in her chest forced a sharp intake of air.

Eladria insisted that the seer explain her words, but the old woman was unable to elaborate. “I’m sorry, my Princess,” she mumbled, shaking her head slowly, the color draining from her wizened face. “I can say no more.”

“What do you mean you can say no more?” Eladria demanded.

“It was a momentary flash,” the woman responded, her voice broken and rasping. “It was gone almost the moment it came. The vision was taken from me.”

“It was as though someone, or something, blocked my sight. I don’t understand it. This has never happened before. I’m sorry, Princess, but I can’t continue the reading. Here, I will refund your payment.”

“I don’t want a refund. I want you to explain what you said.”

“I can’t. Please…forget I said anything.”

But Eladria knew she would never be able to forget those words. The moment they left the old woman’s lips they had been indelibly seared into her mind forevermore.

Three days had now passed since Eladria had made that fateful trip to the oracle. She had barely slept since then.

It was early morning and, as daybreak approached, the princess paced her palace balcony in a state of restless agitation. The stars shone down like celestial sentinels overlooking the royal city as it slept. Outwardly everything was peaceful, but Eladria’s mind was a firestorm of unrest.

She had tried to dismiss the warning and chastised herself for paying heed to the ramblings of a deranged old fortune-teller. She didn’t ordinarily believe in such nonsense and wasn’t sure what had prompted her visit to the old woman in the first place. Perhaps it had been out of boredom, or simple curiosity?

She had done some investigation, looking over security logs and intelligence reports, and aside from a series of unusual storms sweeping across the planet, there was nothing out of the ordinary. But try though she might, she couldn’t shift the feeling that things were about to fall apart somehow; that some unspeakable tragedy lay just around the corner.

The princess came to a stop and wrapped her arms around her chest, shivering in the cool morning air. She gazed across the dormant metropolis that sprawled beneath the palace. Above the central plaza with its fountain and winding marble walkways, the city buildings—of varying size and structure—were illuminated as if by a million static fireflies glowing in shades of blue, white and green. The city was built in the hollow of a large moon crater and encased by a vast, translucent bio-dome. Beyond the arching glass barrier, the chalky moon surface gave way to an all-encompassing void of blackness, punctuated by the twinkling of distant stars and the ever-visible planet around which the moon circled. Dawn was creeping in and the first rays of sunlight were now visible, peeking from beyond the far side of the planet.

Eladria knew she wouldn’t have to worry about the seer’s words for much longer, because this was the day she had been warned about: the Fifth Day of Rusaak.

The Story Behind the Book:

This has been quite a journey. I began writing Eladria almost 4 years ago, in the Summer of 2009. It took a whole year to complete the first draft, then another 2 years to complete countless successive drafts. It wasn’t always an easy task writing this book, I came against some stumbling blocks and almost gave up on it more than once! But I’m glad I stuck it out, because it eventually paid off big style.

Eladria is the first installment in a series called ‘The Alanar Ascendant’ which I’ve been working on for years…and years…and years! It’s a supremely epic tale and whilst Eladria can be read as a more or less self-contained book, it also leads into the next book in the series, The Key Of Alanar, which will hopefully be published next year. Maybe sooner, who knows…

Rory is a social science graduate, writer, blogger and artist from Scotland. With a lifelong passion for creative writing and art, Rory knew from a young age that he had stories he wanted to tell and adventures to share. As he grew up and became interested in philosophy and metaphysics, he came to realise the amazing potential of literature and art as a means of sharing ideas, posing questions and exploring the nature of reality in a way that is accessible yet compelling and challenging.

A natural born philosopher and a student of Vedanta, Zen and Taoism, Rory is an animal and nature lover, music junkie, cake enthusiast and generally rather-chilled-out-guy. He sells his art online and writes blogs on creativity, philosophy, spirituality and whatever else inspires him. His debut novel ‘Eladria’ was published in May 2013 by Cosmic Egg Books and he has released two free short stories (‘Artan’s Night’ and ‘The Royal Runaway’) leading into it.

Says Rory: Eladria is now available to purchase from a wide range of online stores, including Amazon.com, Amazon.co.uk, Barnes & Noble, Waterstones, Book Depository (free international postage!), Apple iBooks and more. I’m also selling signed copies from my website — which include a free CD copy of the soundtrack and bookmark.